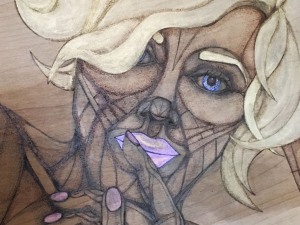 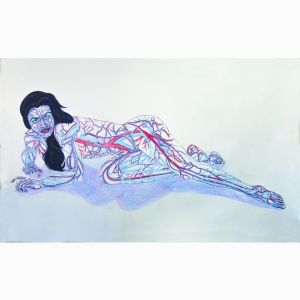 Thank you Melange for making “Body Image” a great success! We had a great turn out and created a huge buzz. The show will remain up until the end of the month. We will take it on tour to Shallots in Salida for the first Friday in September.

“Beauty in Vein” Was a great success! Thank you Mission Comics for my second solo show, it has been a pleasure working with you! I very much appreciated the opportunity to get my work out there and once again be part of SF’s art scene. Here are some pre-opening photo’s the work the night of the show April 13th 2012.

Since Meat Market I have been fortunate enough to participate in two shows with Chillin’ Productions (December 2010) and The Wonderland Gallery (June 2011)! These group shows have been excellent opportunities to show work and meet with other brilliant artists in the San Francisco area. Thank You Wonderland Gallery! 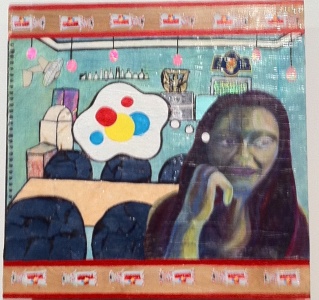 The opening for Meat Market took place on October 22nd. The opening was held at Misssion Comics in San Francisco and was a huge success! For this show I chose to do a series of muscular anatomy illustrations of classic pin up girls. My intention here was to take more than the subjects clothing off. In doing so I wonder is it grotesque or another form of eroticism altogether? By literally turning these women into meat is the viewer then reminded of their humanity?

In Summer of 2010 I had a solo show in Telluride Colorado as part of the Telluride Mountain Film Festival. The Mountain Film Festival is an annual event that focuses on independent documentary films and hosts symposiums addressing themes of environmental impact and conservation. In recent years they have expanded the festival to include an art walk featuring visual artists such as myself. The focus of this year’s festival was the issue of “fading” or threatened cultures. For this show I created artwork using recycled materials (currency, ticket stubs, receipts, photos, plastic bags, etc.) that I collected in Southeast Asia.
The show was designed to look like a giant scrapbook; it was meant to invite the observer to literally walk through the pages of my travelogue and see Southeast Asia from a very personal perspective. 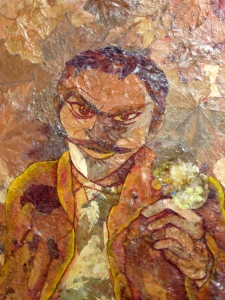 In December of 2009 I had my first solo show at Studio Frank in Telluride Colorado. The show was called Works of Telluride and featured some of the work I’d done over the three years I lived there.